So it’s finally here – the day we’ve all been waiting for- the first day of JenniFoster summer 2017 tour.  I’m going to be honest – it’s hard work driving the car all day.  Towards the end of the day, I was starting to get finger cramps.  I’m lucky I don’t have claw hands like Chandler did after he played Miss Pac Man for a whole day (yet another Friends reference).

I left about an hour later than I wanted to but that was ok since it was Saturday and rush hour traffic isn’t much of an issue.  I am proud 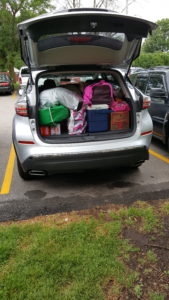 to report that in spite of bringing a shit ton of stuff including 5 pairs of shoes, an ink jet printer and 2 rolls of duct tape, I could still see out the 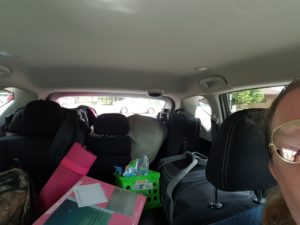 rear view mirror. There is a lot of random crap in there because I’m going to be gone for a month, I didn’t want to forget something.  I also wanted to make sure that I wasn’t traveling alone, so with one

piece of Velcro, I was able to adhere my lucky unicorn to a spot that was like custo

m designed for her.  Throw some tic tacs, gum and chapstick in a cup holder, and I was off.

On many of my previous trips, I have been lucky enough to be a passenger, which allows for you to take pictures and just focus on getting the best shots.  I quickly learned at the big Hormel chili can that driving and taking

pictures might take some practice.  See one of 17 pictures below.  Who doesn’t love burst mode?

I headed south on I39 through the tollway into Illinois where I paid cash dollars for my toll.  I have to go in the lane with an attendant as I wanted to pay with paper money.  The nice man told me I was beautiful and to have a great day.  Now I’m sure that he tells all the middle aged women that, but I’m not going to lie, it was still nice to hear and a nice way to start a journey of many miles.

So while I was 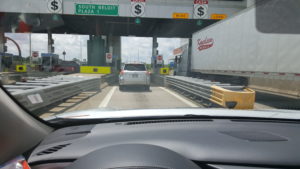 driving today, I had a lot of time to think about things.  I have come to the following conclusions – important life take away here people – life is too short for uncomfortable underwear and pens that don’t write all the time.  We have all one, that pen you have to scribble like 6 times to get it to work.  Throw it away – replace it with one that writes the first time every time.  Pens are cheap.  Don’t settle for mediocre writing utensils.

I’m not going to bore you with a play by play of every mile – but did you know I had to cross the Ohio River to get into Kentucky? Did you know that the welcome to Kentucky sign is located at the end of the bridge?  Did you know I’m scared of bridges?  Again – it is hard taking pictures as the driver!

So at some point in 8 hours of driving, you get bored.  I made a video for you guys to show you what it was really like and what you were really missing by not coming with me.  It’s on You Tube – Here is a link for you. https://www.youtube.com/watch?v=Efp9abB_p98&feature=youtu.be

I also had a tiny snafu with the navigation system in the car.  This morning when I left, I inputted my destination and on the bottom it said 7:24 and however many miles.  So I thought perfect, that’s about when I thought I would get to Crystal and Charlie’s.  As I’m driving along, the number keeps going down and I think I’m making great time so I start dawdling.  I stop at every rest stop I encounter, I stopped early for gas and so on.  So then it says like 4:49 and I know there is no way I knocked that much time off.  Yeah, it was how much longer I had to drive, not what time I was arriving.  Oh well, now I know. 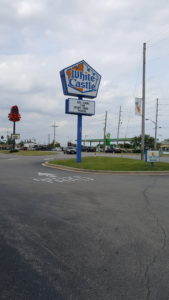 Oh – I almost forgot – I stopped at my first White Castle ever today.  MMMM  I’m going to be doing that again!

OK, this world traveler is pooped and is going to go sleep a really long time in her sweet hotel quality lodgings at Crystal and Charlie’s house.   The bed is super comfy, I have my own bathroom and free wifi!  Seriously, after I leave, I’m going to suggest they Airbnb the place.