Well, it’s here.  What is supposed to be the final move of his stuff out. The bulk of his belongings were taken yesterday so now there is just a half dozen or so boxes left, a couple random odds and ends and the stuff in storage.  He’s supposed to be here anytime now.  I’m not holding my breathe.  It could be hours knowing him.

When I am home alone, anything of his irritates the crap out of me and I want it gone but for some reason when the time comes for him to actually move things, I am so overwhelmed with sadness and disappointment that all I can do is cry.  I literally locked myself in my office and sobbed for like 15 minutes yesterday while he was loading stuff up.  But enough about that for now.

Now that  I will be living alone, this is providing me with an awesome chance to re-organize and re-decorate my way.  Inside my head, I have ideas how I want each room to be – furniture layout, decorating theme and so on.  Since I’ve been bitten by the travel bug, I want to decorate my living room in maps, globes and travel inspired things.  I’ve told most people who will listen I’m on the lookout for globes and man did I score yesterday.

My mom keeps reminding me that with all the changes, this is a good time for me to put into place new habits – so I’ve been trying to go out to breakfast on Saturday mornings – usually alone because it’s a great time to read The Thorn Birds ( for the first time ever so don’t spoil it for me!!).  Yesterday I got going a little later and so I called the the evil twin’s ex wife and we went for nachos and margaritas at like 1030 in the morning.  It was super fun.  I mean, who doesn’t need a little day drinking once in a while.  After we finished there, I was going to take advantage of her and her ability to park in the handicapped spots at Walmart ( oh come on, like you don’t wish you could park there on a Saturday).  On the way to Walmart, we drove past a house with a yard sale sign and like 6 globes in the yard.  We turned the car around and went back.  I ended up with a beautiful old globe that lights up when you touch the base – bright, brighter, and brightest.  The man made sure to plug it in for me to show me how it lit up.  We were chatting and I asked him how he came to have so many globes.  He told me that he used to have a collection but with sadness said that he was moving somewhere else soon.  I was so excited about the globe that after he said that I looked at him and asked him if I could hug him.  He looked surprised at first and then said it’s been a long time he’s had a hug.  I hugged him and thanked him 3 more times for the globe.  It really is quite lovely and I love knowing that it was someone’s treasure – I’ll make sure to treat it as such.

After scoring the globe, it really sucked the fun out of the Walmart trip because how do you compete with that, plus they didn’t have a latch hook hook.  But I got toilet paper so that was a win.

Today wasn’t much of a fun day.  I’ve been watching the internet to keep an eye on my peeps in Florida.  I watched a Lifetime movie for the first time in years.  I cleaned and fixed up my kitchen.  I now have a sweet ocean view on my wall. Thanks to Amazon, I bought this really cool wall decal that looks like a window open to look at the beach and ocean.  I was hoping to would make the kitchen feel less closed in.  I also hung up my new kitchen towels that I ordered from Shutterfly with pictures of the Gulf of Mexico on! 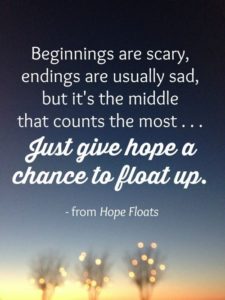 I love the movie Hope Floats.  I just have to keep reminding myself that it’s normal to be sad and scary about starting new things but if I can just sit here quietly with all that, it will be ok!