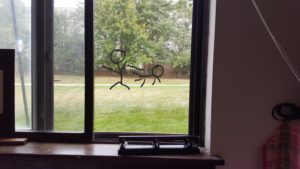 thinking about Maddie and how life without her seems normal. And although I really loved the idea of having a dog, but lets be honest, it never did for me the things that I had imagined it would.  I imagined myself getting each day and taking her for a long walk and we both would love it and I would become glorious tan and thin from it.  Reality – we would wake up in the morning and I would take her out to poop in my jammies, hoping not to see a neighbor and try not to vomit while picking up a bag of steaming dog shit with only a thin plastic bag to protect me from the poo and then we would both come back inside immediately to look for breakfast. I imagined us snuggling in bed and peacefully co-existing.  Reality – she was a bed hog that liked to sleep in the middle and since she was old, I would just let her stay there, it never occurring to me that I would sleep any other way than cold and contorted because not only did she hog the bed, she would lock down the covers under her.  I lived in fear of having forgotten to barricade the trash before leaving the house and coming home to all the garbage spread everywhere.  Maybe it’s selfish, but I really enjoy not dealing with the morning steamy pile, sleeping in a normal position and knowing garbage will stay safely in the can  when I leave the house.  And all of this got me thinking, why did I do all these things?  Because I thought I had to. Because I thought that she would like living her better because she would be the only dog and that was better for her.  But was it really better for me?

I keep going back to a statement Steve made when we broke up.  He said that I had changed since we first started dated, that I had become angry.  He was right, I was angry.  I had stopped doing anything that I enjoyed doing because instead, I put all my efforts and energies into doing what was right for everyone else and I resented him for it.  I didn’t want to do things with my friends on the weekends because that was when he was home.  I never said no to Bailey coming over because Bailey liked it here and who was I to keep a kid from his dad – even if that went we went months without a weekend alone.  I never got to hold the remote, we always had mashed potatoes and I always worried about food everyone else liked before I bought things I liked at the grocery store – heck, at times, I would make sure Steve had everything for his lunch and then he would leave and there would be no food in the fridge.  So yeah, I was angry, my life wasn’t my own anymore.  I had gotten lost in the laundry, and picking up packages and people and beer and doing his “favors”.

So back to the dog.  I felt guilty for letting her go.  Selfish. But here’s the thing – I hear she’s doing great.  Do you think she’s losing sleep over me?  Probably not. And in the end, it’s not really a loss because now I have the whole bed to myself and no more poo in the morning.

I know it’s a round about way of getting to my point but here it is.  I gave up ( had sucked out) my fun parts, my joyful parts, my peaceful parts to try to make the lives around me better and in the process, I took something away from mine.  I know that “finding yourself” is such a cliche phrase, especially for women of my age but for the first time in years, I feel like me.  Using fancy pink wine glasses for a 10 year old’s birthday, working on craft projects, planning trips, having the time and energy to be able to check on my friends going through rough patches, all these things I can do now, now that I have all my parts back.

I’m not saying you need to walk away from life, most of you have pretty great ones, or so it appears on Facebook.  But maybe take a second and realize you don’t have to take it all on.  It’s OK to feed your kids rotisserie chicken and bagged salad sometimes for dinner.  I’m not going to rat you out if you have stubble on your legs.  Dust will NOT kill you.  Make sure you don’t miss your actual life trying to create a perfect one.  Oh and you deserve that spot on the bed more than your dog does.

171 thoughts on “What part of yourself are you giving up for someone else?”