It has been a long time since I have updated you on this journey back, so to speak.  The last month has been kind of a wavy ride, which still surprises me.  I feel like once I have a couple ok days in a row, it should stay that way and when the sadness or loneliness or even the missing of he whose name we will not speak happens, I am somehow failing.  But no matter what hurdle we are trying to overcome, we have to remember acceptance  is the final step of grief and letting go and all the emotions that come with that come in waves when you least expect it.  So to summarize, days  pass, some are good and I am content, some are sad and some just are.

But enough about that, I know what you are all really here for – the juicy stuff – how is the dating going?  The dating that my friend Lori thought would be so fun.  (if you could see me right now, you would see my eyes rolling)  So last time I left you, I told you a received a message from a man who seemed ok, and called me a “hottie”.  Turns out he is married and wants to meet me for “coffee” and “just a hug and kiss this time” – so bad.  I had told him repeated I am not interested in married men and he just can’t seem to understand why.  You got to give him points for persistence though. He does send me a message most mornings hoping for some kind of response.  Most days I ignore him -I know, my bad.  I should ignore him all the days.

Then there was this guy who I will call Shawn from Janesville ( his real name) that seemed nice.  We talked on the phone for 3 hours one night, 3 hours the next – texted the next and when I suggested getting together because we were having a fun time, guess who got all shy.  Whatever.

I’m going to let you read this one for yourself from a man named “Mark”.  I did not reply.  Can you say catfish? Enjoy the syrupy sweet bullshit. 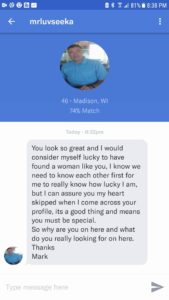 Then there was a guy named Ron who works at my favorite Target store who happened to send me a message.  I should have walked away when I saw the Pokemon pictures as part of his profile pictures, but he said I was really cute and so I thought I would give him a chance.  We exchanged text messages within the confines of the OKCupid system and that was as far as it went.  He was funny – it was ok and he worked at Target – like seriously, how could not want to meet him, if for no other reason than trying to score his discount.  So his mom comes to visit for a couple days and we exchange just like one or two messages a day while she’s here and he informs me on Saturday that when his mom leaves, he would like to meet.  He follows this up on Sunday with a message saying his mom is gone -that is all. And then on Monday – this nice, funny guy sends me these passive aggressive messages and I’m like what????  And we all know the right thing to do is to just ignore it – leave it alone- move on.  But after a solid 18 hours of stewing, I decided he needed some schooling: 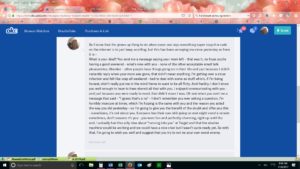 Am I proud of my Target slushie talk? No – but I’m just keeping it real.  But if we’re being honest, they are delicious.  So now, I’m afraid to go to my favorite Target Store in the morning ( when he works) because I don’t want to have to be on high alert to avoid him.  This is what people mean when they are like don’t shit where you fish.  Now I’m going to have to go at night or go to the awful one with the escalators!

However, I will end this on a hopeful note.  I do have a date tomorrow night with a man who seems nice enough named Kyle.  He displays proper use of small talk. He seems to be pretty nice and sweet and says nice things to me – at this stage – what else can you ask for?  I will report back on Friday – wish me luck!

116 thoughts on “Like the sands through the hourglass, so are the days of our lives…”