I know that title sounds kind of Buzz Lightyearish but really – there were points during the trip to Georgia that it seemed like infinity might be closer.

After being coffee-d up – I hit the road about 9 am Saturday morning for what I thought was going to be a 9 hour ride to Atlanta to meet up with Lori.  What I did not account for was that I was going to get caught in the snowbird exodus.  I think the sign below should pretty much sum up the whole trip.  In case you can’t read it clearly, it says something is 23 miles away and it will take 66 minutes. 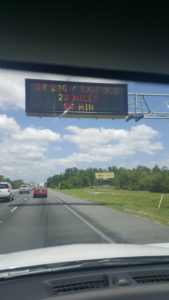 So yeah – my 9 hours day became like 12.  But alas, just about the time it was dark out, I made it to the Best Western Shenandoah in Newnan, GA where I was re-united with my traveling companion.  The cute part was that we were both like 13 year girls at a slumber party – “OMG – I have so much to tell you” – That literally happened and then proceeded to try to tell each other everything that happened that night even though we would have all the next day in the car together.  ( Just a side note – while we were in Atlanta with short pants on – the people at home were dealing with sleet and inches -even feet in some cases- of snow.)

Sunday morning came fast and we were on the road by 730 am.  Lori said she would drive us out of Atlanta and I have never been more happy to relinquish control in my life.  I was exhausted from the day before and it was raining like I hadn’t seen in a long time.  We probably saw at least 6 accidents before we even got out of Atlanta.  There were probably more but then Lori let me go back to sleep.  She was extremely calm and confident no matter how hard the rain came down and how stupid the people were around us.  She was definitely the brains of our operation that day.  I think I only drove for maybe 90 minutes that day – I was burnt out from the day before and the weather was making people drive stupid and I just couldn’t get in a groove.  Lori recognized this and relieved me of driving duty for the rest of the day.  She really was a champ that day.  I did capture some sweet pictures though as the passenger.  The picture

on the left has a 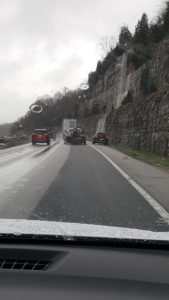 neat waterfall on the right side of the picture. On the side of the road.  I could be wrong, but I feel like that might be where rock falls are made.  The picture on the right is supposed to be the beautiful Tennessee Mountains but there were low clouds that day, so we were almost in them.  We finally made it to Kentucky where we met Lori’s son at Costco for a quick stock up and then I was safely delivered to my friend Crystal’s house for the next 36 hours.  – Why yes, it is the same Crystal who kicked off my tour last summer!  Lori spent the time in Kentucky with her son and exploring.  I got to go out for fajitas with Crystal and sleep late.  It was glorious.  But just like that, it was time to return to real life and at 7 am Tuesday morning Lori called me and said, I’ll be there in 10 minutes, even though we weren’t supposed to leave until 730.  We both just couldn’t wait to get home.

Next time: The last day

94 thoughts on “To Georgia and Beyond”