Let me tell you friends, it has been a busy week. First things first – I’m super excited as I finally hung my framed post cards from Florida up in the bathroom and have 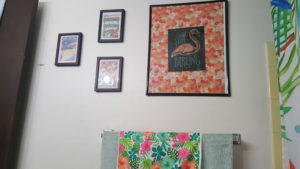 that all situated as I want it.  It’s always so amazing how just some little touches can make a whole room seem new and exciting.  See – it’s totally a tropical paradise now. 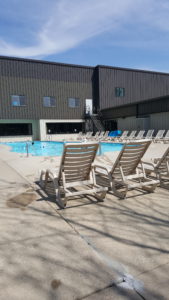 I also am super excited that outdoor pool season is slowly beginning here in Wisconsin.  I was quite delighted to learn the outside pool at my gym opened this week, where it was warm and sunny almost every day.  The water is heated so it was good to go.  I spent a lovely afternoon there this past week with two creepy old men.  I mean, I didn’t actually talk to them, they were just the only other people there, which was not bad, I would take quiet creepy men at the pool to a pack of loud kids.  Holy shit – that’s something an old lady would say.  Whatever, it is what it is, we all know I’m no spring chicken.

Even though Steve and I broke up, I’ve been trying to keep up my relationship with Bailey because it’s important to both of us.  So long story short – Bailey has decided he wanted to be baptized in his church and this Sunday, today in fact, was the big day and do to my relationship with him, I needed to be there.  This also meant I would be seeing Steve, which, as I am sure you could imagine, caused me quite a bit of anxiousness and apparently, I wasn’t the only one concerned about this because Bailey talked to me a few weeks ago and made me promise his dad and I would not have it out in church.  I assured him we were grown ups, and this would not happen, but told him his dad and I would sit down ahead of time and talk over coffee or something so that the air was clear in church.

SO… Friday night Steve came over and we sat on the porch and over beers, caught up and talked about a laundry list of things. (on a side note, he had on an earring – in 7 years, I had never once seen him use the pre-existing earring hole in his lobe.  I nearly lost beer through my nose when I saw that)  I will spare you all the conversational details but here is the conclusion I have come to – he was a really important part of my life to a long time and we had some really good years together and I think there is part of us that will always care about the other BUT, I’m not the same person I was when I was with him and he is not the same person I fell in love with.  I’m not going to lie, it was nice to see him, he’s familiar, we can talk about things without having to give a back story but it doesn’t hurt anymore to see him.  When he left, it felt right that he left and then I was home and content without him being here.  I didn’t long for him like I had months ago.  I think the best thing to compare this to is the following – we all have our favorite Target Store – we like it because we like the things they offer, we know where things are like the good candy and the hemorrhoid cream, but if it burns to the ground or we move to a different neighborhood, we won’t stop living, we don’t stop eating candy, we find a new store, maybe a Wal-mart, maybe a new Target and we make those places the new normal and familiar places. Because as we discussed more than once, life goes on.

Today turned out to be a wonderful day in spite of the loosey-goosey church service – no disrespect to those of you who appreciate a contemporary non-denominational service but as a girl who’s church experiences during the formative years were Catholic, a service with no Lord’s prayer and a tambourine, was way outside of the box for me.  Bailey was so excited about taking this step and I was so glad to be there to support him.  After church we all  had lunch at Rocky’s with Bailey where Jenny and Mark introduced me to the most delicious pizza I have even eaten.  I would like to formally endorse the motherlode.  So much cheesy goodness.  It was a nice time, and I’m glad we were all able to create a nice family memory for Bailey.

I think that is probably enough happening for one week, who even knows what this week holds. But with that, I will sign off here as I must do some laundry now because I’m currently wearing the last clean pair of underwear I own and all my swimsuits are one pieces.