Well, it has happened. I have found the one that makes my soul sing. His name is compact Keurig with a 36 ounce water reservoir, options for brewing 6,8 or 10 ounce cups of coffee and it is the most beautiful shade of light teal.

I have hemmed and hawed for years about getting one because they were pricey but then, I put it on my Christmas list and Santa brought it! I also got about 6 weeks worth of K-cups to go with it. Luckily, I also received a lovely jar as a Christmas present that matches and is the perfect container for storing K-cups.

I know that there are people everywhere who set up their coffee maker before they go to bed each night and wake up to fresh coffee. I am not together enough for that. I also never understood those people who woke up, had coffee and sat quietly for a while and then started their day. I am one of them now. Like, for example, yesterday morning, I woke up, made a big cup of coffee, mixed in some chocolate milk ( I was out of creamer/white milk) and sat in my cozy chair, listened to a podcast and did Sudoku on my phone while coffeeing. It was amazing. I am one of those people now. Also I got more done yesterday than I had in ages. I finally tackled half of my nemesis, the pantry, where if you follow me on Facebook, you will see I had quite the collection of outdated “non-perishables”. This morning, I could easily see where my cream of mushroom soup was located as I put dinner in the crock-pot.

I don’t want to oversell this, but I think the Keurig is finally going to allow me to realize my potential and become the person I was always meant to be. Until about 1 pm. Then I will crash and require a nap or more coffee.

When you are growing up, there are many things that you are warned are dangerous, including, but not limited to, fire.  As you get older and mature, allegedly you transition from being scared of these things you were once warned about to being a master of them.

I specifically mention fire because it does hold a little of a fear factor for me, I mean fire is hot.  Fire is always hot.  Fire can destruct things but it also can take a piece of raw meat and turn it into some crazy deliciousness.  Specifically when used in grilling.

So, the other day I had planned on making hamburgers and I thought to myself, well, it’s a balmy 32 degrees out, and I have charcoal, why not try and grill?  So I did it.  I packed that chimney full to the top of charcoal and put it in the grill with those those little starter pucks under it.  I lit it up with a single match ( I know, ninja like, right?) and sat back and watched it smoke and flame and flame and flame.  I was told that once the flames died down and the coal was ashy, I could dump my coals and begin cooking.  But it took for ever…. Like at least 30 minutes and there were still flames.  So finally, I just dumped it anyway, they were mostly ashy and that was when the magic happened.

I should back track and let you know that when I decided I was going to fire up the grill, I thought, well I’m using the charcoal anyway, so I pulled more meat out of the freezer.  I boiled a pack of brats in beer, defrosted some chicken breasts and covered those with roasted garlic and herb seasoning and made my pound of grass fed beef into hamburger patties.

I feel like the grill could’ve been hotter but even still, it cooked my meat to beautifully brown and delicious and I couldn’t have been more proud of myself.

Now, I know that to many of you, this might not be a big deal, but here is the thing, it was a big deal.  It was one of those things someone else always did for me and I felt I wasn’t able to do, but I said, f-it, I’m a grown up and I have a grill.  If I want to use it, try and stop me.  (inside my head, I just heard Beevus and Butthead – fire!)

Like most over girls, I grew up with many Disney fairy tales where the beautiful princess always gets her prince ( well, except for Frozen, but that was way after I was grown up) and the forest creatures are your helpful friends.  Obviously my prince charming is still a frog somewhere and well, the animals, that’s a whole different story.

So I live in an apartment and there is a fair amount of wildlife around me.  Bunnies, squirrels and chipmunks are all over and I’m not going to lie, I normally finally them pretty cute and have been known to feed them a time or two.  Ok – fine, I might have bought them special food for years.  I mean, really, is there anything cuter than watching a squirrel try to get away with an entire cob of corn in his mouth and then return said cob empty the next day?  I’ll tell you the correct answer – not many things are cuter than that.

I used to have a cat and a dog living with me. The dog left with my ex-“roommate” and the cat died earlier this year.  I also should tell you that I have a corner apartment and my bedroom sits on the very corner of the apartment building.  Every once in a while I would hear scratching in the wall in my bedroom and it would freak me out – but luckily, I never saw anything on the inside, even though I would try to quickly shine my flashlight on the corner where the action was happening.  I finally had had enough and was afraid that something was going to get in.  And although, a small rodent wouldn’t kill me, let’s be honest, it would really freak me out.

I head outside and sure enough, there was clearly evidence of something trying to get in my wall. See below.  Furthermore, when I went to the very outsidest corner of my bedroom, there was a hole in the floor, that clearly looked like something was trying to tunnel in.  Freaked out, I talked to apartment office and they told me they would put me on the list for pest control on Friday.  It’s only Tuesday at this point, so I have three days to deal with this on my own.  It was suggested that I could fill the hole with steel wool, so being the resourceful girl I am, I shoved an SOS bad in there and felt secure until the pest control guy came on Friday.

So flash forward to Friday morning.  I had just woken up and was about to get in the shower when I hear a knock on the door, but I got in the shower anyway.  ( I know, such a bad ass) He comes in, ( the office had given him the key) announces himself, hears the shower, leaves.  Like 5 minutes later, still in the shower, dude comes back.  I’m thinking, are you an idiot? Like even if I got out of the shower the second after he left the first time, I would still need time to dry off and get dressed, this isn’t real life Skinamax after all.

He stuffs the whole with steel wool, put some kind of poison outside and luckily, it’s been about a month now, and there is no more scratching in my wall at night.  I also feel a little guilty because what if it wasn’t a rodent but The Little’s Family and now I killed them.  ( those were great books, weren’t they?)

Also, I stopped feeling the squirrels. They weren’t sewing me ball gowns anyway. 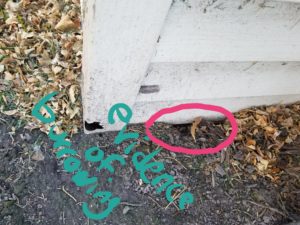