So after taking Thursday to lick my wounds and get myself back on track, I spent one last night in Florida with Barry where we enjoyed yummy chicken and the second night of the two night big brother premiere.  I’m putting money on Christmas to take it all!!!

Friday morning tried waking up at the crack of dawn again, this time with better results.  After a shower and packing up all my stuff, I was on the road to my next stop by 7:45 am ish.  I wrapped the ankle up tight and I was off to Leigh Acres to meet my dad’s cousin.  We have talked for years but this was the first time we were meeting in person. 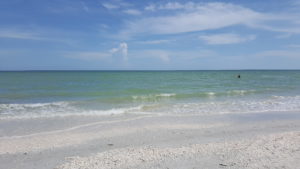 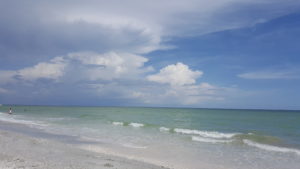 After 5 stops in about as many hours, including a stop at the post office and a candy/jelly factory, I finally arrived and as Lori had predicted, it was like we had already known each other.  I was greeted so warmly by her and her husband and after a quick sandwich, we headed out to Sanibel Island in the Gulf of Mexico.  Little did she know, I was hoping we would go there after reading about it on the internet!!!!  So we crossed a bridge and then after driving through the cutest town, we were at the beach!!!  There were seashells everywhere, which I now have many of and after a heavy application of sunscreen, we ventured into the water!!!!  Although I am a grown up, I was nervous and so Christie held my hand as we ventured out in to the gulf.  We were bobbing up and down and then I got a mouth full of water.  For some reason, I was surprised when it was quite salty.  LOL.  It also stung my eyes and when I went under and got a nose-ful, I was sure I wouldn’t need my neti pot for a few days.

After a couple rough days, things were finally looking up and it was like all the animals were on my side.  We saw 4 schools of sting rays swimming, one went right past us while we were in the water.  It was amazing.  I also saw a flying fish and pelicans hunting.  It was simply amazing and more magical than I ever expected.  I am also pleased to report that by once again wearing sunscreen, I avoided looking like a lobster!!

Following our fun time in the ocean and picking up seashells, we packed up and headed to a quite little store where I probably bought enough stuff to keep them in business for another day.  You don’t need to know it all, but just know that I got my very own starfish.

We headed for home after that but first stopped at this market that sold fresh juice, fruit and ice cream.  After sampling grapefruit juice, lemonade, and strawberry orange juice, we got vanilla/orange swirl ice cream cones. MMM!!!  It was like a dreamsicle in an ice cream cone.

For dinner today, I had shrimp cerviche which was simply one of the most delicious things I had ever had in my whole life.  I was a little nervous because normally when you make cerviche, the acids in the sauce cook the meat instead of heat but the shrimp were firm and pink and mmmm.  Later I found out they had been cooked the regular way before they were mixed in which made me feel even better about it.

Did I mention I also saw trees with coconuts growing on them and on the ground around them as well as bear and panther crossing signs?  I also saw a pineapple growing.  This part of Florida is like vacationing in a whole different tropical country- but without a passport.

I’m hobbling around pretty good. My ankle is a little sore and tired and the bruising is coming out now, so hopefully, we’re on the mend and I will be Grand Canyon ready by Tuesday!

2,911 thoughts on “I don’t want to jinx things – but things are definitely looking up”