So I rolled into the Grand Canyon about 7 or 8 pm local time.  Apparently they are on Arizona time and I wasn’t aware and I had lots of trouble when I was there knowing what time it was.

When I got there, I was greeted at the gate by a lady park ranger who took my money.  There was no one in line behind me so we chatted a bit and I told her that I was there alone and she was impressed and told me she lost her husband 4 years ago and wanted to travel too.  I suggested she start small and just do it!!!

After I paid my $30 park fee, I headed in to register for my campsite.  While in line, there was a lady elk eating grass nearby.  Super cool.  Actual conversation while park check in guy:

Him (older fellow): Just one car?

Him: Just one tent?

Him: Well, enjoy your visit.

He handed me a map and I was on my way.  I found my site and had to go the bathroom, so I headed to the bathroom which was one campsite away and was pleasantly surprised that it had flushed toilets, running water and toilet paper without wood chips in it! Score!!! 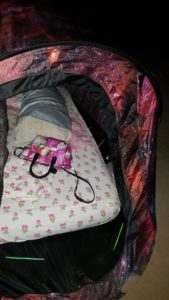 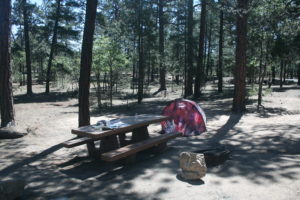 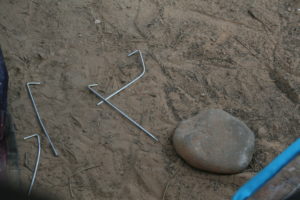 It was starting to get dark, so I set up my tent, semi – successfully pounding in some stakes with a rock, blew up my air mattress, put on my strawberry sheets , cracked some glow sticks for ambiance and settled in for the night. After eating  sandwich, I was ready for sleep.  I listened to some Enya since the WWW was non-existent and fell asleep quickly but not without making sure my keys were handy in case I was scared and wanted to hit the panic alarm.  I slept like a 15 year old that night.  I don’t think I moved at all and slept for a long time into the morning.  By the time I work up, many of the people had already headed out for the day.

I was kind of slow to get moving and was just sitting in my comfy chair enjoying the day, thinking about my plans and checking my eyelids for holes.  I opened my eyes and realized I had a visitor.  A beautiful lady elk. 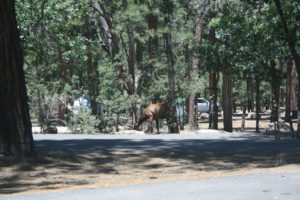 After that excitement, I gathered up my park map and headed over to take a shower at what I thought was 1 pm.  I got there and they went to close the shower for the noon cleaning.  That is when I realized I was on Arizona time.  I waited and then spent $2 in quarters for 8 minutes of a fairly decent shower.  I was ready to see the Canyon.

I’ll let the pictures speak for themselves.  As if you had to ask, but no, there was no hiking.

My second night camping was just as successful and I slept well in my little tent.  The worst part was having to get up off the ground quickly with the sore ankle when I woke up to go to the bathroom.  I wasn’t really scared ever and felt quite safe.  The camp sites were close to each other and all of them were occupied so I think that added to the security of it.

When I woke up the second morning and came out of my tent I was promptly greeted by the site of one of the Asian fellows camping across the “road” scratching his bare ass.  Forever.   I could have done without that experience.  Eventually   I got moving  and made myself a decadent breakfast of 2 cups of Starbucks Caramel Latter and apple cinnamon oatmeal thanks to a borrowed backpacking stove, and after another $2 8 minute shower, I headed back to the populated world.

I eventually  made it to Flagstaff, Arizona and decided I needed a moment to spend with the WWW and catch up on work emails and the like, so I treated myself to sit down lunch at the Olive Garden.  They had fantastic WI-FI and I didn’t have to share my bread sticks with anyone!  After about an hour, I felt back in touch with the World, finished my spaghetti and headed back out on the road for the trip to my final destination, Colorado Springs, Colorado.

Overall, I think the Grand Canyon experience was amazing and am so glad I did it.  The only moment that paused me was when I had lunch alone at the Desert View snack bar and was surrounded by families.  But then I realized, I only had to pay for one hot dog and the cheapskate in me was quite pleased – so I splurged on the souvenir soda cup.  LOL

5,954 thoughts on “I can’t believe I haven’t told you all about the Grand Canyon yet…”