So as my friend Jason is always so quick to point out, for a blog with Photos in the title, there are not nearly enough pictures here.  In order to address that concern, I will now tell you the story of my trip to Florida in pictures.

A little background – I have come up with this goal with camping at all the National Parks and in particular, I have become borderline obsessed with the idea of camping at the Cumberland Island National Seashore off the Georgia coast.  It is an island, in the ocean with feral horses, no motor vehicles and awnings made from antique oak trees. ( https://www.nps.gov/cuis/index.htm ) Knowing my friend Lori has friends and family around Atlanta she likes to visit, I hatched this idea that we could “carpool” to Atlanta, I could drop her off, do my camping and then come back and collect her, and we would carpool back to Wisconsin.

After some thinking, I realized I wasn’t really in the place to haul my gear, alone, by cart, half a mile to my sweet island campground and decided I needed an alternative destination and like a bolt of lightening, I realized I could go back to visit my family in Florida at their tropical, palatial estate again.  So a plan was formed, Lori and I would travel together from Madison to Atlanta, where I would drop her off and I would keep going to Florida and return several days to collect her.

Now, if you remember correctly, my last trip was in the middle of summer and weather was very little concern to me.  Tis not the case in April people.  It snowed the Monday morning we were leaving, so our 6:45 am departure, quickly became 9 am.  A wise decision on our part, because once we left, the roads were in pretty good shape and we made it without incident Lori’s favorite Dairy Queen in the US – El Paso, Illinois.  So quick note – before my last trip, my dad hooked me up with his Tom-Tom as his new truck has a navigation system and he no longer needs it.  I never needed it, so I forgot to pack it this time and we pick up the rental car and guess what – no navigation system – so once I ditched Lori I had to rely on Veronica, my trusty Google map advisor via my cellular telephone.  It worked ok, but was annoying. 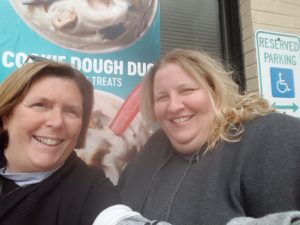 After lunch and the required picture, we were back on our way to Clarksville, TN.  ( I know, I look rough) 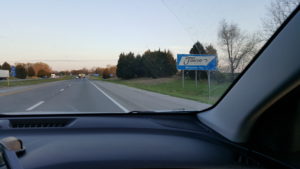 As the day went out, things got warmer and greener and by 5 pm, it was hard to believe we had left snow behind.  We made it to our bargain hotel in TN that was surprisingly nice even though the “No Refunds after 15 Minutes” sign concerned us slightly – turns out it was close to a military base and people were using the rooms for like an hour – showering and then saying they wanted a refund.  Lori made a great roommate and we were asleep early.

The next morning we left at some ridiculously early time like 6 am and headed towards Atlanta.  It was warm and sunny and even the Nashville traffic couldn’t dampen our excitement.  There was a small issue near Chattanooga because

as the passenger I wasn’t ready enough to take a picture of the Welcome to Georgia sign. Twice.  Luckily, the Welcome center had one and I was able to take this gem.

We made great time and I dropped Lori off for the pick up of her Georgia rental car and I continued on to Florida where my goal was to get about an hour over the state line.  I made it about 6 pm to the sunshine state on a cloudy, grey day.  Apparently after 5 pm, the Welcome Center doesn’t give a crap about you, so I didn’t get free orange juice, but I did get to take a picture of one of my favorite signs to see.  I take the picture, get back in the car and drive for about another hour to my 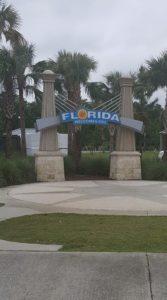 hotel in Alachua, Florida.  I get there, I check in and the girl tells me I’m in room 129.  Its one of those hotels with the outside doors.  I pull up and all the lights are on, the curtains are open and the TV is on.  I didn’t even get out of the car, I just went back to the desk and asked for a different room and was awarded a lovely poolside room, unfortunately, it was raining so that was no real prize.  Also – important life lesson learned – Taco Bell does not have a delicious taco salad. They put rice and beans under the lettuce which not a good surprise.

I go to bed without incident, sleep in until like 8 am and hit the road again to for final destination.  Except for a short stop for a super satisfying breakfast of a bagel and chicken biscuit from McDonald’s, I made it to my final, tropical destination without incident where my large ziploc bag full of cheese and I were warmly greeted and happy to settle in for a few days.

607 thoughts on “Highlights from a brief escape from Wisconsin”