So finally, after two and half days of driving and almost 1500 miles, I make it my Floridian paradise.  It was so wonderful to see my cousin Christie and her husband, Emil again.  Also, this time, her sister Roben was staying there, so I got to meet another cousin.  It was quite wonderful.

Since I didn’t arrive until mid afternoon, we kept things pretty low key the first day.  We “just” took the golf cart to the neighbor’s to use his swimming pool, outside, in April.  The water was a little chilly but it didn’t bother me, I mean I was OUTSIDE IN THE POOL on a perfectly sunny day with no clouds in APRIL.  It was so amazing.  The amount of green everywhere was such a welcomed change from the snow I left behind.  After swimming, we returned home to a home cooked meal concluded with a fancy bundt cake Roben baked that afternoon. From Scratch. I went to bed kind of early that night and fell asleep probably 3 seconds before my head hit the pillow.

Thursday morning, I woke up to coffee and homemade breakfast including  yummy cheesy biscuits like those at the Red Lobster that Roben had baked the day before.  Then we suited up and made the car ride to Sanibel Island which is one of the most wonderful places on earth.  We found excellent parking and a nice spot on the beach that had both sun and some tree/bush behind us that we could hang things on.  Before we left the house that morning, I “carefully” applied what I thought was a sufficient amount of SPF 50 spray on sunscreen.  I was wrong.  But 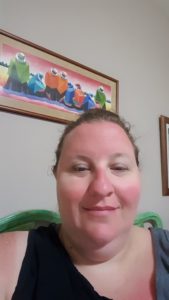 in all seriousness, although I was pretty red, I would say on the JenniFoster scale of 1 to 10 where 1 is winter color skin and 10 is a blistered sunburn with fever and chills, this one was maybe a 3.  I took an ibuprofen and had minor discomfort.  It was really such a lovely day at the beach.  The water was warm and I probably spent about 2 hours in it.  Saw a bunch of tiny fish and pelicans.

It was super lovely.  I even collected a small amount of the tiniest sea shells ever.  The only low point of the day was that I foolishly, did not properly hydrate for the amount of sun that I got, which made the car ride home a little dicey.  There was quite a bit of traffic and I was riding in the back seat and at one point, I did start looking through my beach bag for an empty ziploc bag in case the inevitable happened but alas, it did  not and once I got home, was still and hydrated, I felt good as new and was ready for a dinner adventure with the ladies.

That night for dinner, Christie, Roben and I headed out to a local seafood restaurant where we had a life changing appetizer – hot cheesy crab dip.  It was so delicious that Christie found a similar recipe on the way home that we had for dinner on Friday night.  It was really such a lovely night and I really enjoyed spending time with them.  It’s weird when you meet someone and you know you’re family.  It’s kind of like you fast forward a bunch in the normal “friendship” courting and there is this connection because you know that they are your people. It makes me sad that they are so far away and we can’t make like a monthly get together. After dinner I was spent and pretty much once again fell asleep three minutes before my head hit the pillow.

Friday was my last full day in Florida and was busy but in a different way.  We went to Aldi’s in the morning to get somethings for family dinner Friday night and so I could score some coconut Greek yogurt (really, so I would stop talking about it – but really, it is life changing).  I did some work, we headed out again in the afternoon to go to the orange store where I got fancy juice to bring home (strawberry orange anyone?) and grapefruit.  I also ended up getting the c 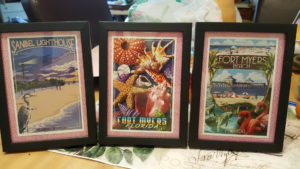 oolest post cards which have been readied to hang in the bathroom with some other flamingo/ocean themed items.   After all our errands were done, we headed back to the chilly pool one more time and I tried to soak up all the Florida I could.

But by far, the best part of Friday was dinner.  I got to meet the son of my cousin and his family as well as some more relatives of Emil’s.  It was such a fun family night with delicious food and good company.  Christie’s crab dip was a close match to that we had had the night before and I ate chicken with skin on it for the the first time in I can’t remember how long.  I just have to say, in this world of boneless, skinless chicken breasts, there is something amazingly decadent about a perfectly grilled piece of crispy chicken skin.  Also, not to toot my own horn, but someone ( this girl) really was able to showcase just how much Spanish she remembered from high school, a mere 25ish years ago. It really was a fun night or buena noche.

Unfortunately, my time in Florida past too quickly and in a blink of an eye it was Saturday morning and time to head back to Georgia to meet up with my car pooler.

I also feel, that in the interest of full disclosure, even though I fully know my cousin will read this, I must share the two following things:

1) Dinner at the seafood restaurant was so fun.  The scallops were nasty.  I ordered them broiled and they came in THE grossest oily orange “juice”.  Note to self – stick to fried seafood.  You can’t mess that up.

2) I brought home half a suitcase of empty water bottles – but before you judge, let me explain.  At my cousin’s house, they drink all bottled water.  It was warm there and I thirsty.  So we would come home from somewhere, I would grab a bottle of water, head to my room, check my email – get ready for the next activity- etc. I would head to bed, I would grab a bottle of water – I think you get the picture.  Well, like an idiot, I should have just taken my empty out with me the next time I came out, but instead, I started throwing them in my suitcase, so then 1 becomes 2, then there is 4 and by the time I left, I think I had about 10.  So now I’m embarrassed because I drank like half a case of water and I was trying so hard to be a good guest and so I just packed the empties with my stuff and tossed them when I got home. I felt pretty foolish until one of my sisters told me she did the same thing at the house of our aunt one time. I guess somethings are just genetic.

UP next: To Georgia and beyond

819 thoughts on “Florida: There is a reason they call it the Sunshine State”